I was happy to catch Rakshith Naresh, Adobe ColdFusion Product Manager, and sit down and talk about the next 10 (and more!) years of ColdFusion. He gave an amazing talk at CF Summit East 2019, about cool new features of CF 2018 and what the future brings.

Why does almost every CIO think that ColdFusion is dead?

So often it happens that I come across a CIO that thinks CF is dead or dying in a legacy land. One of the reasons why is that is CF is in its 24th year! This means that most of the languages didn’t even exist back then.

One more reason is that legacy code is still a big issue for most of the companies. What this means, is that so often companies don’t keep their CF regularly updated, which means, less security and more spaghetti code. But, this is easily solved by keeping your CF up to date, modern and secure.

Here’s an example. Websockets is becoming very popular now. ColdFusion has had it since 2011. In order for CF to be relevant for the next decade, Adobe plans to go to the cloud. Serverless is what the world is aiming now, and for CF to be a relevant player in the game, it is planning to become the most productive platform.

Cloud containerization and serverless is the goal for Adobe.

CF is working on becoming a multi-cloud platform. Which means it won’t be dependant on only one cloud.

CIO priorities for 2019 and further

If you’re depending on a single cloud provider platform this means that once the system is down, you’re down as well.

Related: When Amazon Web Services Goes Down, So Does a Lot of the Web

This is easily solved by having a multi-cloud presence. Adobe ColdFusion will have a common API interface for both clouds. That way you can move from one cloud platform to another. No need to write the code again. You will agree, this sounds pretty awesome!

60% of applications by 2020 will be present on multi-cloud platforms. 90% of all new applications will be micro-services spaced. No longer will there be monolithic applications, but instead you will be able to break them into practical components and stored into containers. So, CF will become a micro-serviced application.

To help you understand why micro-services are so important, think about this: if you want to update your app, or pieces of it, you have to update the whole thing. Which is not the case when using micro-services. So, all issues can be edited separately, by figuring which micro-service has an issue Vs. checking the whole code.

Flexibility and efficiency are much higher this way. More reliable as well.

Adobe ColdFusion 2020 Roadmap is coming and more interesting news and features as well. 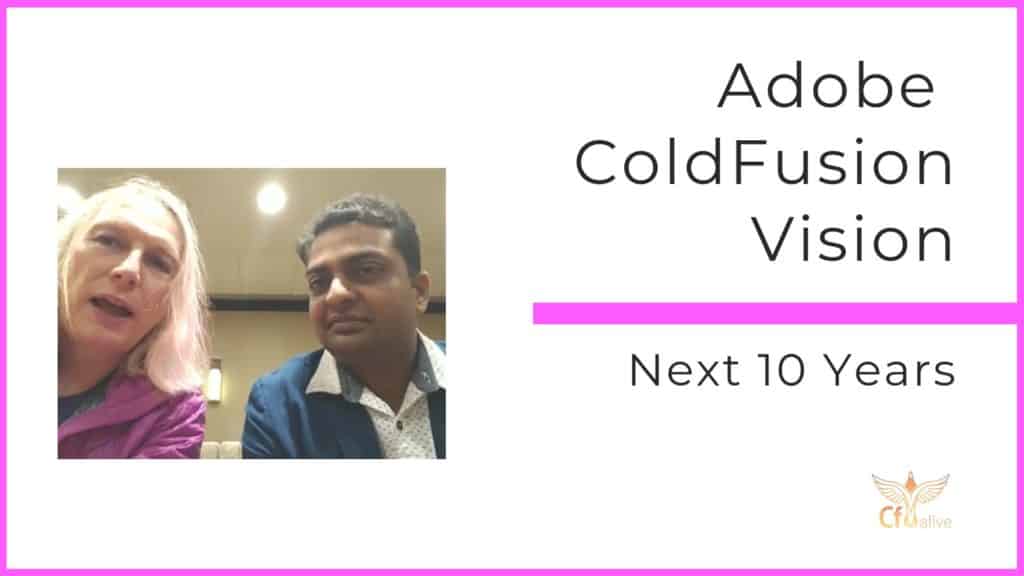 Discover how we can all make CF more alive, modern and secure this year. Join other ColdFusion developers and managers in the CF Alive Inner Circle today.

Follow
Adobe ColdFusion Vision for the Next 10 Years, with Rakshith Naresh
2